I’d like to share some pictures from my recent trip to Africa. While I visited 4 countries, most of these images bellow are from Ethiopia, as it was the main purpose of the photo expedition.  It was an amazing experience that enabled me to see some parts of the world that are not typically in the news; I was able to experience the lives of those who live in remote areas and are isolated from the luxuries we came to enjoy( toilets, water, food, clothing). I had no phone or internet connection for most of the trip!  Often, I’d put down my camera and just immerse myself in their lives. That allowed me to learn more about the people, their struggles and traditions. Living with them definitely helped quite a bit in capturing some of these photographs. Sharing meals, laughs, learning how to sing and teaching them my awful dance techniques were some of the highlights of this trip and hopefully made their monotonous lives just a bit more fun.  🙂  Not to mention pancakes made from a root of a banana-like tree that were fermented in the ground for 7 months!! It amazes me at the stuff we come up and the knowledge we’ve collected over our existence. I mean, how do you come up with an idea to dig up the tree roots, grind them and then put them in the ground for many months?!

I made notes under many photographs so that you can understand a bit more about each photo and what it represents.  Please note that there’s some

For many of us it’s a bit of a taboo, but it is normal for a number of tribes in the areas where I’ve photographed to walk around without clothing. What we think is weird is completely normal to them and my job is to show the reality. If you are sensitive to it, kindly do not scroll any further.

The conditions some of these indigenous  Ethiopian tribes live in are really hard to call “livable”, at least for many of us. They learned to survive on the land that is not fertile and lacks water sources. Imagine walking 2-5km each way, every day to get water. Imagine eating the same basic food every single day, with no salt or spices.Imagine living with 2-4 other people in a “bachelor/studio home” as small as 10×10″  where 1/3 of that home is for your cattle, and the only thing separates you is a small wooden fence.

Many times I wondered how they are still alive. Mortality rate is extremely high, yet they’ve adapted themselves to the harsh conditions very well.  Even 2 of my Canon DSLR cameras did not survive the trip in these harsh conditions(booo @ Canon for their dust and heat resistance). During the time spent with some of the tribes, I learned some of their issues with the government, the corruption and other issues. It is not a political blog so I will leave this information out. I’ve been in contact with a few organizations, who hopefully will attempt to intervene.

Those who want to purchase these photographs framed canvases or prints start at $600cad for 16×20″ and you can contact me via this blog or better through the website: Toronto wedding photographer Dmitri Markine

Portrait of a Mursi woman. Mursi are one of the most unique tribes in the world. They are mostly known for wearing lip plates. Among the other tribes they are known as the most fierce warriors.  It was a very enjoyable experience living with them and studying the ways of life. We are unique to them just like they are unique for us. At the time of the visit, some had never even seen a mirror! There are no jeans or t-shirts and still live the way many of us lived 1000s of years ago.

At around puberty females cut their lower lip and install a clay plate in the opening. As time goes by they stretch the hole and put a bigger disk in it. Those plates can easily reach 7 inches in diameter!Lower teeth are often removed to make the lip plate sit comfortably in the opening.

The larger the lip plate, the more cattle her parents can ask for her when it`s time for her to get married. It’s a beauty sign.  All marriages are arranged by the parents.  How do they kiss you may ask. Well, they don’t!

Life is not easy. This is just an example of a female who is traveling from a market where she made a purchase. Chances are, her home is many miles away. There’s isn’t much water during the dry season in many areas and women and children have to walk up and downhill for many miles to the water source to fill up a water container.

I have no idea how they do it,but they are very proficient at using their heads to carry heavy articles . There are no horses,cars or even bicycles to help them.

There are a lot of kids everywhere. They tend to know 1-3 words in English

Kids  help their parents with the younger siblings. You could see a lot of 4-6 year old kids carrying their brother/sister in their hands or on their backs.

Guns are owned by most if not all men in all the tribes. Kalashnikov AK-47 is a weapon of choice. You have to have a gun and at least 30 cows in order to get married. The cattle is given to the parents of the bride.

Suri’s gazing lands are under intense competition. They often have to battle with the neighboring tribes who bring their cattle on their lands during the dry season. Suri also have to protect themselves as those tribes do raids on their territories and steal the cattle.

Shoe shining is quite popular in bigger cities!

These girls are from Hamer tribe. Note the hair style. This is a typical hair style for women in that tribe. It’s a beauty sign and they spend a lot of time on their hair. Whatever clothing they have is all handmade by them.

Often kids take care of the cattle. Because there may not be enough grass around the villages, sometimes the cattle is taken many miles away

Average life expectancy in Ethiopia is 45 years. Finding old people to photograph was a real challenge!

Here’s a woman with the leather ring around her neck. It indicates she is the first wife. No other rings are visible. That means she is the only wife her husband has. I could not get her age, as she doesn’t know, but likely to be around 20.

These girls are standing where it used to be a river. It’s the dry season and there’s no water there right now. Often they have to dig into the ground to get some water!

Mother is trying to calm  her child. Behind  is her house. It may not seem big, but that’s where her family lives.A 60 sqf house for the whole family and a few goats!!

In some areas you can find kids on the side of the road dancing and doing tricks. All they want is an empty water bottle. Ignorant tourists feel sorry and give them money, bottles and other gifts. They don’t know that these kids are skipping school with the idea that they rather do this and make money(they sell the bottles) than study. Empty water bottles are sold in markets! I understand some of us want to help, but ignorance harms them more than your good-will “donation”.  It is always important to do research when you travel to make proper decision and not simply be a tourist.

These stones(in the shape of men’s genitalia…) were built many many centuries ago. It’s believed these were built for the fallen warriors.

The scars are from the bull jumping ceremony. Women let their man whip them with sticks inflicting deep scars. If I am not mistaken they also put oil or butter on the wounds to make the scars bigger. Every woman has to go through this ceremony. They are very proud of their scars! You can see those scars in some other photographs as well.

A woman is preparing a mix which she will later cook. It isn’t a meal any of us would pay or even be paid to eat.

This is how coffee is made in Ethiopia. Beans are roasted right in front of you. Then they are crushed and hot water is added. I had it almost every day when there was a way to do so! It is very delicious and fresh.  You won’t be able to drink Starbucks after trying this coffee!! I stopped at a place in one of medium-size villages(~300-500 people) and they had a roadside eatery where I ordered 6 cups of coffee( in my defense, they were very small, maybe 60-75ml). All the people who worked there and a few local guests came to watch as they didn’t understand how someone would want to drink 6 cups 😀

Many tribes eat raw meat… Raw goat meat is served quite a bit.  They claim raw meat taste way better than cooked! I’ve tried it and I am not so sure lol.

Women are doing their hair as part of their regular routine.

Many men and women take a good care of their hair… 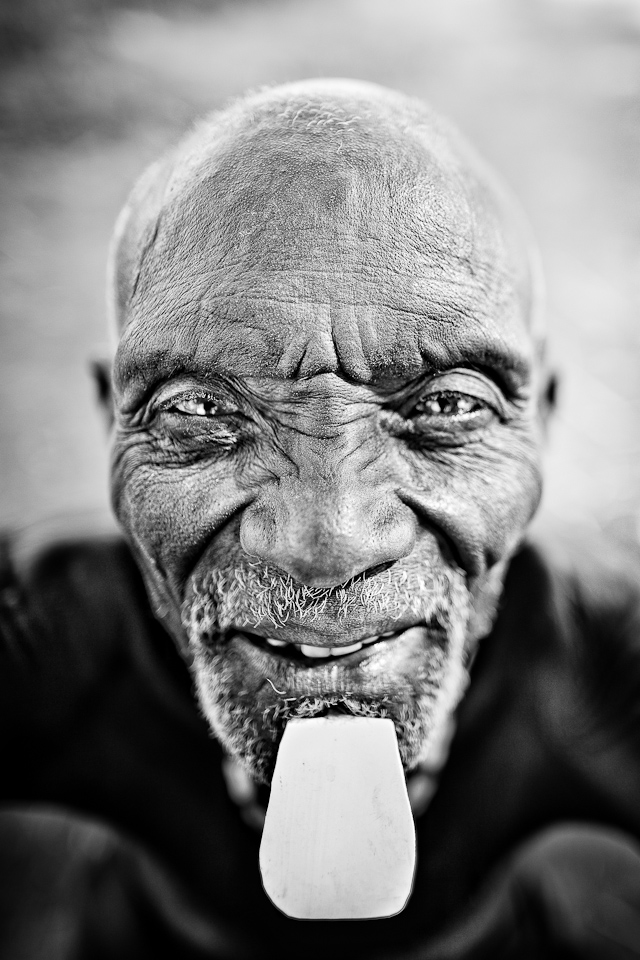 It took me a week to find these really old men

All the beads and decorations are worn by all the tribes on daily basis. These are NOT for tourist attractions like in many other countries where underneath the traditional clothing you can see jeans and t-shirts.

All of these decorations are to show what tribes he/she belongs to. Beads are  used in prayers to count blessings. They also believe that beads bring peace, health and prosperity to the wearer.

Young people sometimes put on “everything they have” when they go to the market to show off themselves to the ladies. Often those markets are very far so these men are probably waiting for some kind of transportation to help them at least with a part of the journey.

Decorative scars.  Many tribes practice Animism as their religion. Voodoo ceremonies are common as well

A school at one of the villages. Kids are so excited to see something different for once and not eager to listen to their teacher who had to use a stick to calm a few of them down. As in many other countries, there’s very little or no funding at all and such schools are operated on money collected by parents or perhaps Western organizations who sponsor. I brought a lot of pens and other supplies in hopes my interruption would at least help a bit.  Some of these kids don’t come every day due to the lack of money or because they needed to work. Child labor is a part of life. Parents often can’t feed their kids unless the whole family is working.

In case you’ve never seen it, here’s $50 BILLION dollars from Zimbabwe. You’d think you can buy a country with it,yet this is barely enough to buy an egg…

I’ll finish this with a few animal safari pictures. Most are from Botswana

These are also sometimes called McDonald’s Antelope. Because of the letter M on their butt. Plus they are an easy snack 🙂

I won’t go into details as it’s a sensitive topic.  This was a little scary yet a really cool experience! Being near real lions and spending some time with them in the wild was  something I always wanted. The trick was finding the proper place to fit my views on this sensitive topic…   Subject: Dmitri Markine  🙂